Nicki Minaj is letting the anticipation build even more for the release of her new album “The Pinkprint.” Originally set to release November 24, the album’s release has been pushed back to December 15. Nicki gave us a little taste of what we can expect with the drop of her new single, “Only.”

The track debuted on iHeartRadio yesterday and it features Nicki’s fellow YMCMB fam Lil Wayne & Drake, and Chris Brown compliments the record in the hook. The song consists of a slow and simple beat but with the use of a synth bell on each count it makes a tough platform for Nicki, Drake, and Wayne to shut down all rumors about sleeping with each other. 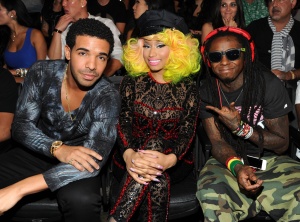 ” I never fucked Wayne, I never fucked Drake, on my life man fucks sake. If I did I’d ménage with ’em and let ’em eat my ass like a cupcake, my man full he just ate…”

Listen to the full song here: