Kanye West’s debut collection with Adidas Originals was probably one of the most anticipated shows during NYFW Fall 2015 and he definitely did not disappoint.

Not only did Ye showcase his first collab with Adidas but he also revealed his latest track “Wolves” featuring Sia and Vic Mensa during the show.

Typically I would be praising Yeezy for his music and fashion sense but for me the best part of this show was the fact there were 2 models representing heavy for Puerto Rico; Monic Perez, who was Miss Universe Puerto Rico 2013 and my fellow Element model, Braina Laviena.

I’m so incredibly proud of these girls, especially of Braina who I’ve had the pleasure of meeting and working with, she’s one of the most badass girls I know and she absolutely murders the shaved head look! 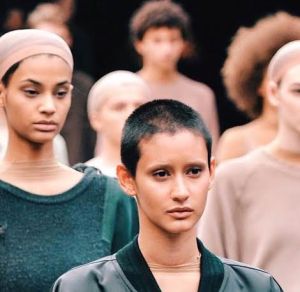 Sorry Yeezy but she stole the show! SO FIERCE!